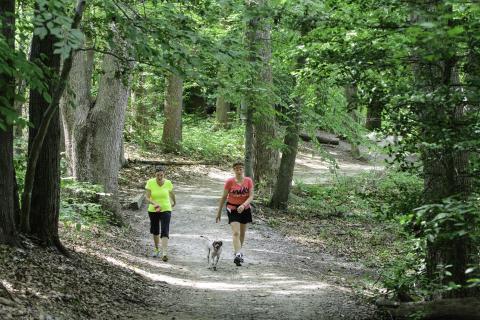 Did you know that Burke Lake Park could have once been home to Dulles Airport?!

Burke was a small farming community in the 1950s with a population of only about 200. As the federal government was looking for a prime place to build a large international airport with a new terminal, a mobile lounge, and longer runways, it decided Burke was the ideal location. (The exact spot is where Sunrise Living is today.)

As it went about acquiring the land needed to build this large new airport, the community wasn’t pleased. The government paid homeowners $100 per acre for their property, which many took — not necessarily because it was a tempting sum, but because the atmosphere surrounding an airport was not conducive to their farming and livestock.

In late 1957, due to many circumstances, the government changed its mind about the site of the airport, selecting the area of Chantilly as a better alternative. Original Burke landowners were offered the chance to repurchase their land, but since so many had already moved away, it was instead offered to developers at auction.

Before the developers got their chance, though, Fairfax County purchased a considerable acreage — at a discounted price — with a vision to create Burke Lake Park.

The Park opened on May 25th, 1963, and has been a jewel of the county since its introduction.

Now the Fairfax County Park Authority controls close to 900 acres of land, all of which is accessible at no charge for Fairfax County residents. Non-residents must may a nominal $10 parking fee, which is used toward upkeep of the Park and its facilities.

Inside the Park, visitors will find places to picnic, play mini-golf and disc-golf, or even ride on a miniature train or carousel. There are boating tours, fishing piers, biking and walking trails, campgrounds, and a parlor to pause for a refreshing ice cream. Volleyball courts and a complete 18-hole golf course round out the options for all-day and all-ages entertainment.

Family vacation traditions start at Burke Lake Park as enthusiasts of all ages enjoy the warm weather days of summer — and fun well into the Fall — walking the 4.68 mile unpaved lake trail as well as swimming and boating at Burke Lake Park’s man-made lake.

There is a marina where visitors can rent boats to take out onto the water as well as a conventional boat launch for personal watercraft. Gasoline-powered craft are prohibited, however.

There is ample green space to play, exercise, and explore, and the Park Authority also holds family-friendly special events and classes on exciting topics like studying the lake turtles, photography, and astronomy.

After September 8th, the Park is open weekends only, except for the train and carousel (which are also open Mondays) until the end of October, and weather permitting.

Imagine how the area would be different if it had actually become an airport. Don’t miss out on this oasis in Burke!