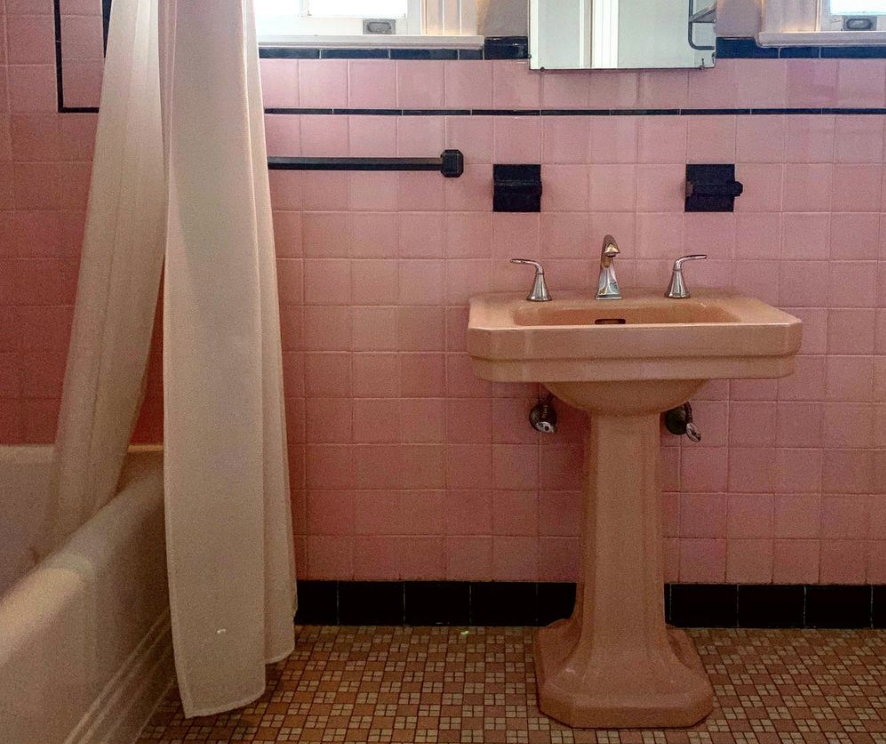 Does your home have a pink tiled bathroom that you’ve been wanting to replace? Wait and read this! This one is for those who want some history with their interior design… and those dated blush-colored bathrooms may actually be a bygone era boon.

An actual See the Pink Bathrooms movement started in 2009 when one retro renovator became concerned that the pink bathrooms so common in homes built in the 40s, 50s, and 60s were being demolished. She started a website to honor the once-favored home trend and tens of thousands joined the mission.

Pledging to protect this unique part of the nation’s home design heritage, and predicting that it would eventually make a comeback, mid-century design home lovers rallied to Save the Pink Bathrooms, a shout-out which has since become a trend on social media and can be seen on several DIY home design shows. The effort remains vibrant — and may even be at its strongest — over a decade later in 2021.

Th popularity of the pink bathroom reflects the cheer and optimism of the post-World War II era, and it came straight from the White House. Dwight Eisenhower was serving as President and his wife, Mamie, was well-known to love pink. While it is said that Dwight gave Mamie a bouquet of pink flowers every morning, her penchant for pastel went way past what could be shown off in a vase. She decorated the White House with so much pink that people started calling it “The Pink Palace,” and soon, home builders and decorators started following suit.

Mamie Pink, or First Lady Pink, became the color of choice for everything from armchairs to appliances, but nowhere was the hue in more high demand than in the bathroom.

Over 20 million homes were built in the two decades between 1946 and 1966, and a good portion of them – literally millions! — contained pink tiled bathrooms. Some even had pink floor to ceiling, with pink flooring, pink tubs, and pink toilets.

In the late-60s designs became more sober, but pink bathrooms may be the ultimate emblem of vintage, and those quintessential cotton-candy bathrooms of the late 40s to early 60s are finding a new fanbase with trendy homeowners.

As interest in mid-century design has resurfaced, several older trends are revisited, and in the case of the pink bathroom, even sought out when making purchasing decisions. A new generation of buyers, as well as nostalgic older ones, love retro style. So what was once loved is back to being cool again.

Luckily, our area has many homes dating from the 50s and 60s — a plethora with their pink bathrooms proudly on display — and as homebuyers in the Springfield and Burke areas today are grabbing up the ranches, capes, and split-level homes that were once the dream of America’s greatest generation, they are finding that the pink bath preserves a truly special character of the house.

Decidedly punchy, these pink powder rooms are experiencing a renaissance also since homebuyers may not be able to afford homes that have already undergone extensive modern renovations and these homes are coming on the market just as their previous (and potentially lifelong) owners are ready to retire them.

2021 has shown that first-time homebuyers are more interested in DIY project homes, and especially those Millennials and Gen Z just aging into the market, are fascinated by mildly ironic and unique interior fashion that reminisces of bygone days. And just about everyone has all-white bathroom fatigue. So it’s true! Those Barbie bathrooms are back in style.

Saving the pink bathrooms has even become a major topic on TikTok as Millennials and Gen Z are leaning into the look using #SaveThePinkBathrooms to offer these rooms a rose-colored rallying cry.

So if your home has a pink tiled bathroom that you’ve been anxious to replace, think twice. Those vintage bathrooms are in the pink!